This section contains information on Salinas de Añana, a village whose council, like that of Valdegovía, belongs to the group of councils known as the Cuadrilla de Añana. 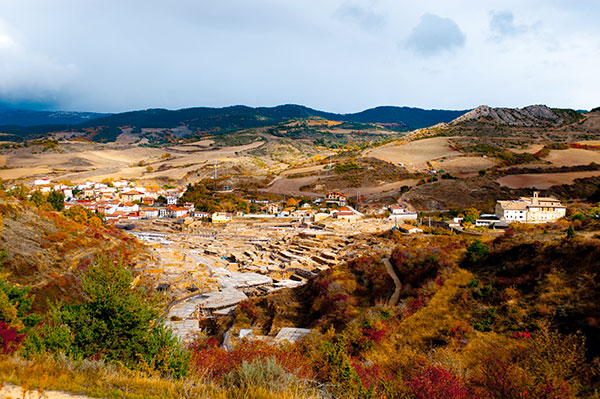 Salinas de Añana, the oldest chartered Villa or Town in Alava, has after several decades of ruin and neglect begun a fresh start.

Commercial exploitation of its salt springs and restoration of its old salt beds has opened a future for the most unusual landscape in the Basque Country .

Declared a Cultural Heritage and Historic Monument, Salinas de Añana received its charter in 1140,, making it the oldest Town in Alava. In fact, from the Neolithic period and particularly from Roman times onwards, its landscape, economy and history have all been inextricably linked to the working of its salt water springs.

Salinas de Añana is above all else a singular landscape. Stunningly bright white between June and September, it takes on a ruin-like greyish-ochre hue in winter .

This porticoed labyrinth of wooden beams under which the salt river flows has always been known as the Valle Salado or Salt Valley, and on rainy or misty days it exudes a ghostlike atmosphere which provides the perfect setting for a thousand-year-old story .

Work begins towards the month of April, when any beds that have suffered caving-in or cracking due to winter rains and frosts have to be repaired.

The process of obtaining salt through the evaporation of salt water involves a series of tasks, namely filling, stirring, watering, collecting and bringing in the salt. This cycle takes approximately two days.

If the salt production season is to be profitable, it is essential for the sun, preferably, and wind to supply enough energy to evaporate the water and crystallize the salt.

WHY DO THESE SALT SPRINGS OCCUR?

The structure of the Añana valley is determined by the emergence of internal substances that have crossed a series of upper strata and broken the earth’s crust as a result of orogenic thrusts. This phenomenon, termed diapir, has given rise to the salt springs and to outcrops of gypsum which are exploited close by. It also produces red clays with violet overtones.

Making the most of the changes in level of the Valle Salado and its uncommon diapir type geological structure, the most substantial interior salt beds in Europe were built over an area of 120 hectares.. The site is a complex structure of over 5000 ‘beds’, platforms supported by wooden frameworks and stone walls from which the salt is extracted.

These ‘beds’ are split into groups of 20 or 30 which constitute a ‘farm’, each with one or two deposits known as “terrazos” under the beds that are used to store the salt obtained during the period of work.

The salt water or brine gushes out from the salt springs at the far south of the valley. This water is distributed from a reservoir close to the springs into two wooden channels. These are known as the "Rollo de Suso", which channels the brine along the left-hand side of the valley, and the "Rollo de Quintana" which flows along the right-hand side. The latter channel has a greater flow which is subsequently sub-divided. The brine is stored in the wells for each farm, and from there it is used to fill the beds, which are then left for the drying action of salt and wind to crystallize the sodium chloride.

Archaeological traces from the Neolithic-Bronze Age, the Stone Age and the Roman period have all been found in the area of Salinas de Añana.

It is not known exactly when and how the salt springs were discovered, but it is clear that for hundreds of years the salt market was fundamental to commercial trade, and that it brought wealth and splendour to the Town. This surreal and chaotic landscape of ruined wooden scaffolding, galleries and channels forms one of the doors by which Alava entered the history books.